Gili in Sasak (Lombok dialect) means a small island. Nevertheless, when people mention Gili islands they refer to three islands in the northwest of Lombok, a big island sitting at the east of Bali. It's less popular than its sister Bali. But the place is better if you want to see less tourists and enjoy more vegetation.

Let's talk about the Gili. They have a particularity: no fuel motor is allowed. Transportation is only made via horses, bike and sometimes electric scooters. The result is that it is much calmer than the rest of Indonesia while still letting you take advantage of good infrastructure.

To reach the Gilis, I took the public ferry by night to reach Lombok instead of using the traditional speedboats. I prefered to travel with locals rather than sharing seats with other tourists. It was not such a great idea since at night there were no more public transport to bring me to Bangsal, the port from which public boat bring you to Gili island.

So, I had to pay an expensive taxi. But it turned to be a great experience. First, the driver brought his daughter into the car. She looked prepared to go to school. At 1 in the moring it's still surprising. Then, the driver put the radio on to play loud indonesian electronic music. The second after he started to drive like if he was in a racing competition. I was scared at the beginning and thought it was really bad. But I get impressed by his skills and his capability to take care of others while driving at 100km/h on small roads. I congratulated him when we arrived. To be honest the fact he put his own girl on the backseat before we start the trip made me think that it was not too risky (at least from his point of view).

Whatever I arrived at Bangsal, I met a guy wandering there. He invited me to sleep in the only available homestay for a decent price instead of waiting for 5 hours for the first boat. So I slept a little bit and took the boat for Gili Trawangan. I found quickly a place to stay and enjoyed spending my day here.

After a short raining and a bicycle round trip, I did a very good snorkeling session where I saw giant turtles. Then came the time of sunset and dinner. There were many venues to enjoy both. Trawangan is a little bit different from his sisters because you can party hard there. So I went to a few bars before going to sleep. It was nice and diversified but nothing outstanding.

I spent two other days on Gili Air. It was similar to Gili T but much calmer. There I had the opportunity to rent a full old house. The girl who owned it was a little bit crazy and presented it at a classic homestay. She showed me my room but I was the only one in the whole house.

I got too lazy to visit the third island, Gili Meno, reknowned as a perfect honeymoon place and quieter. But many people recommended it to me, so go there if you visit the Gilis! 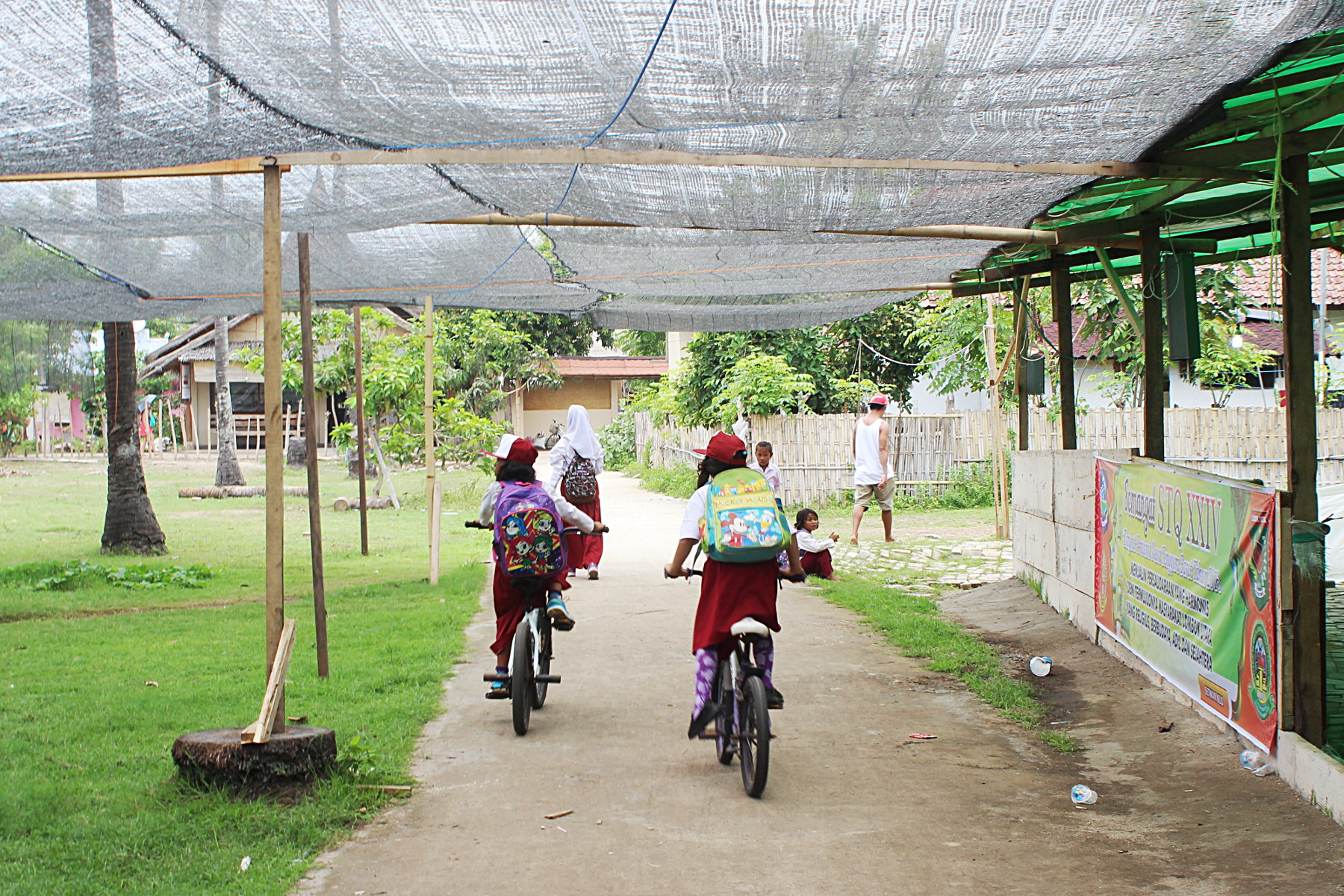 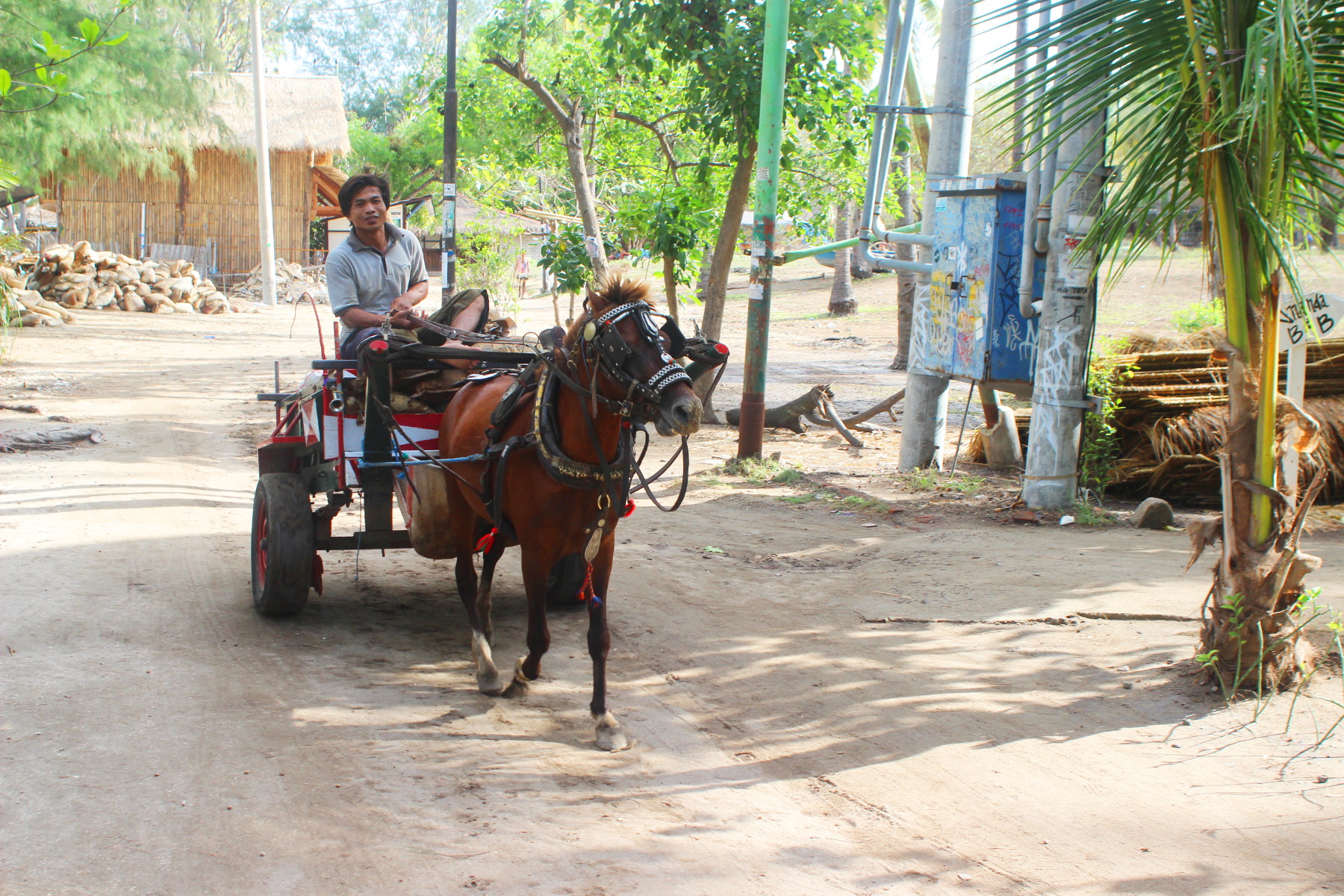 To transport people or heavy stuff, they use horse cars. 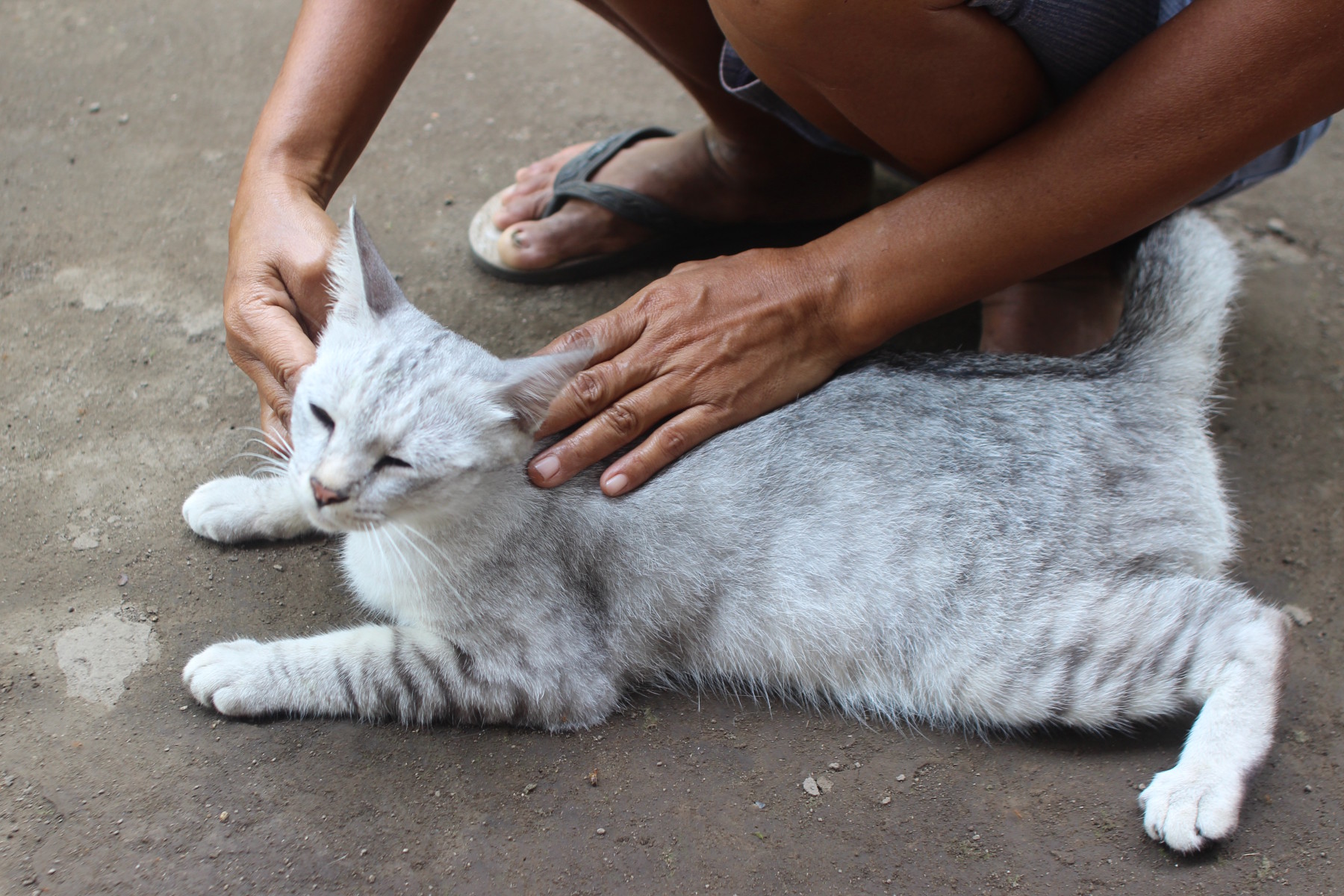 Cats are cute on Gili Island. 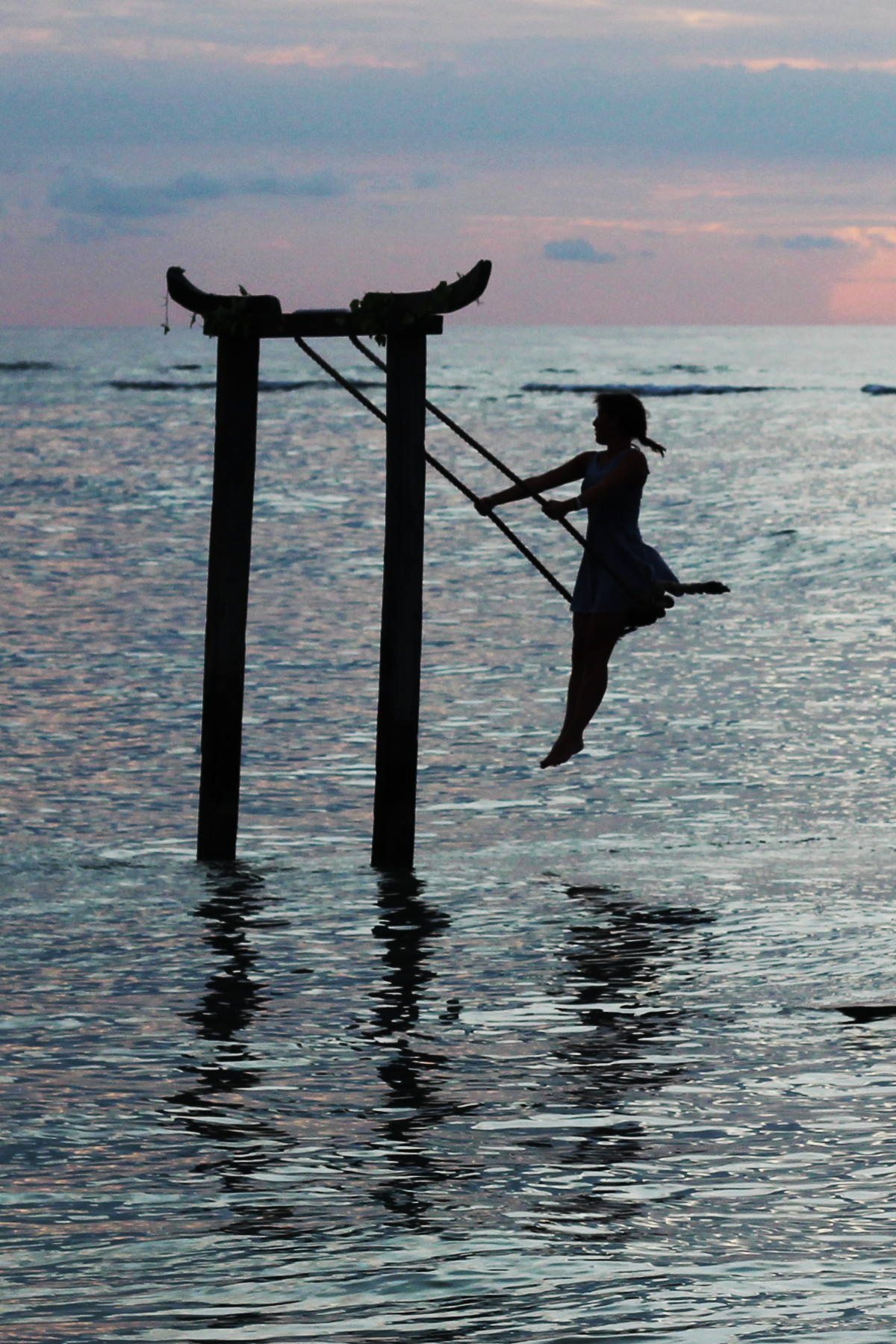 A swing on the sea. 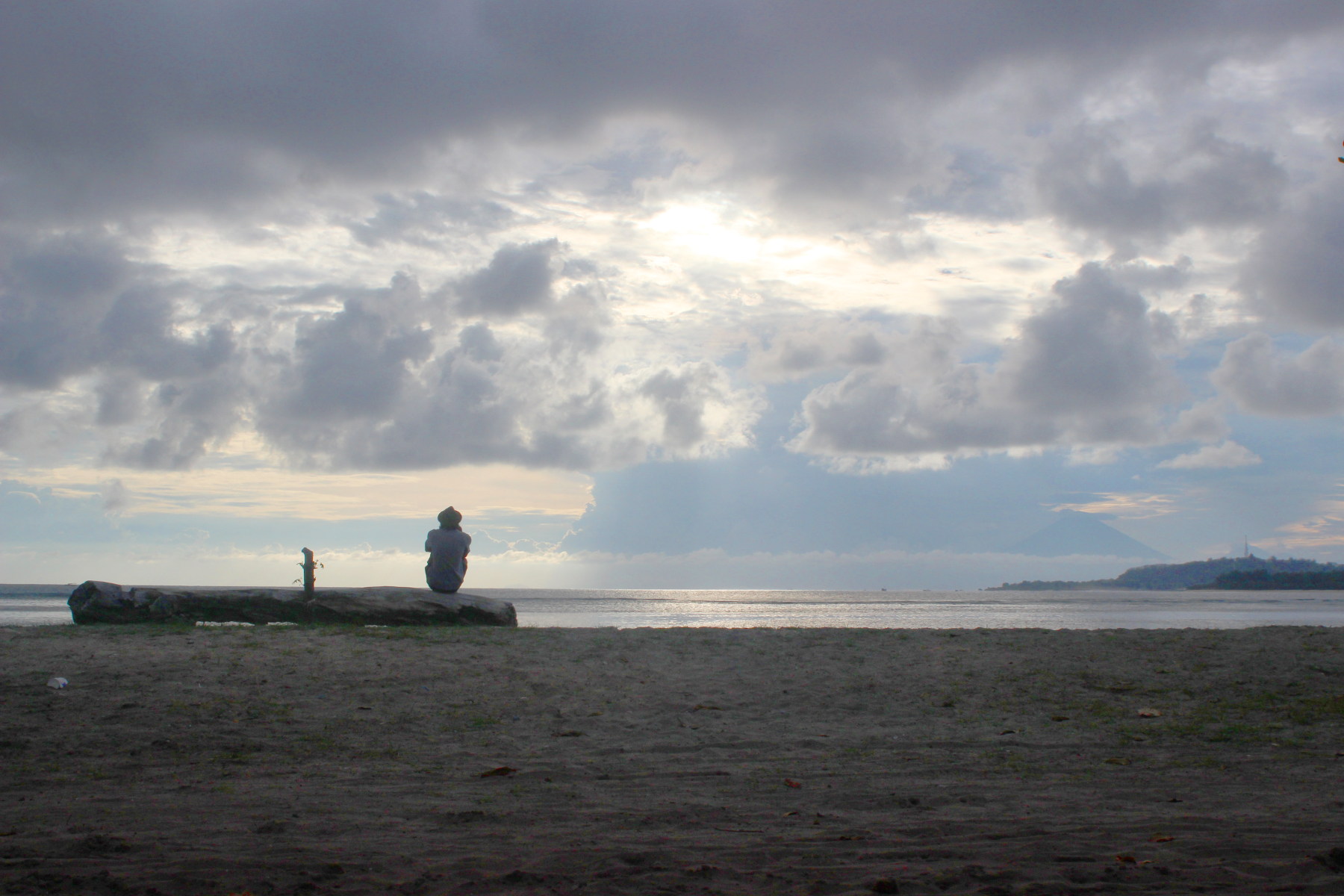 A man watching the sea. 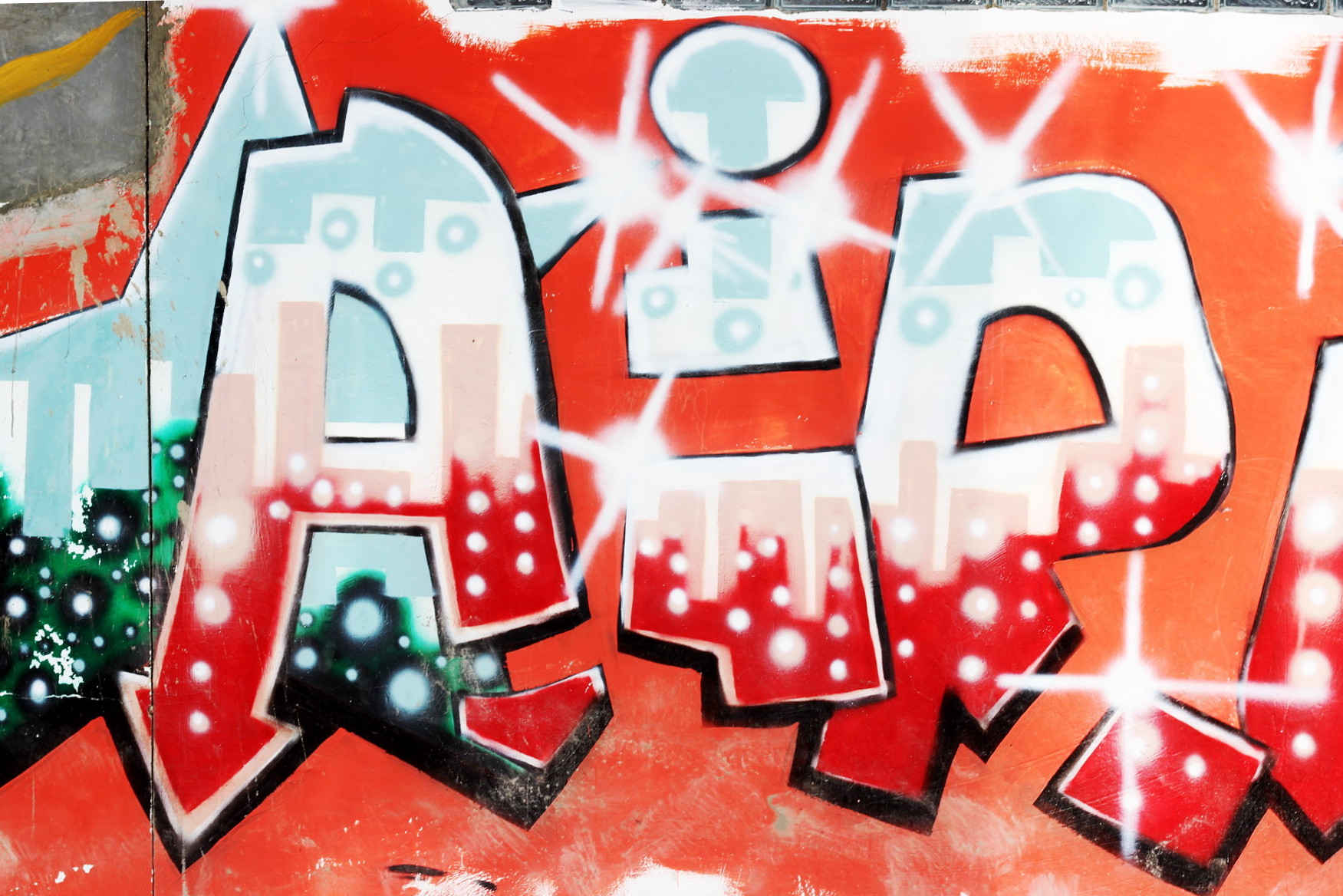 Once my time was done in Gili, I decided to go for hiking to the summit of the Mount Rinjani. I called a contact I had in Bangsal and started to prepare my stuff for this expedition.

In Gili Air, I met a talented artist named Cleise. With her husband Hero they own a shop. I had a warm welcome when I passed by to their place. I recommend you to get there to get good tips about Gili and maybe to bring one of their drawing or picture to home! 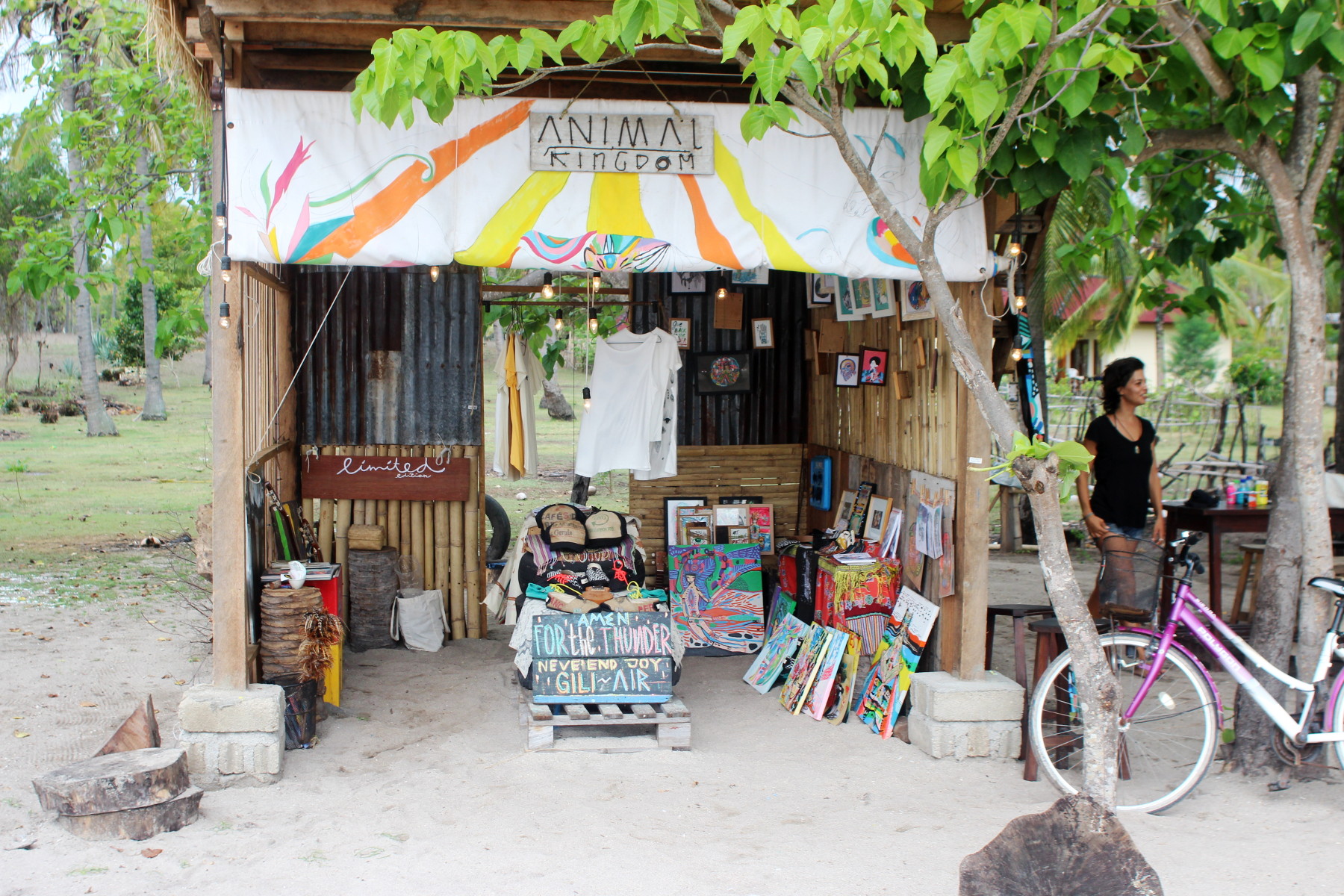 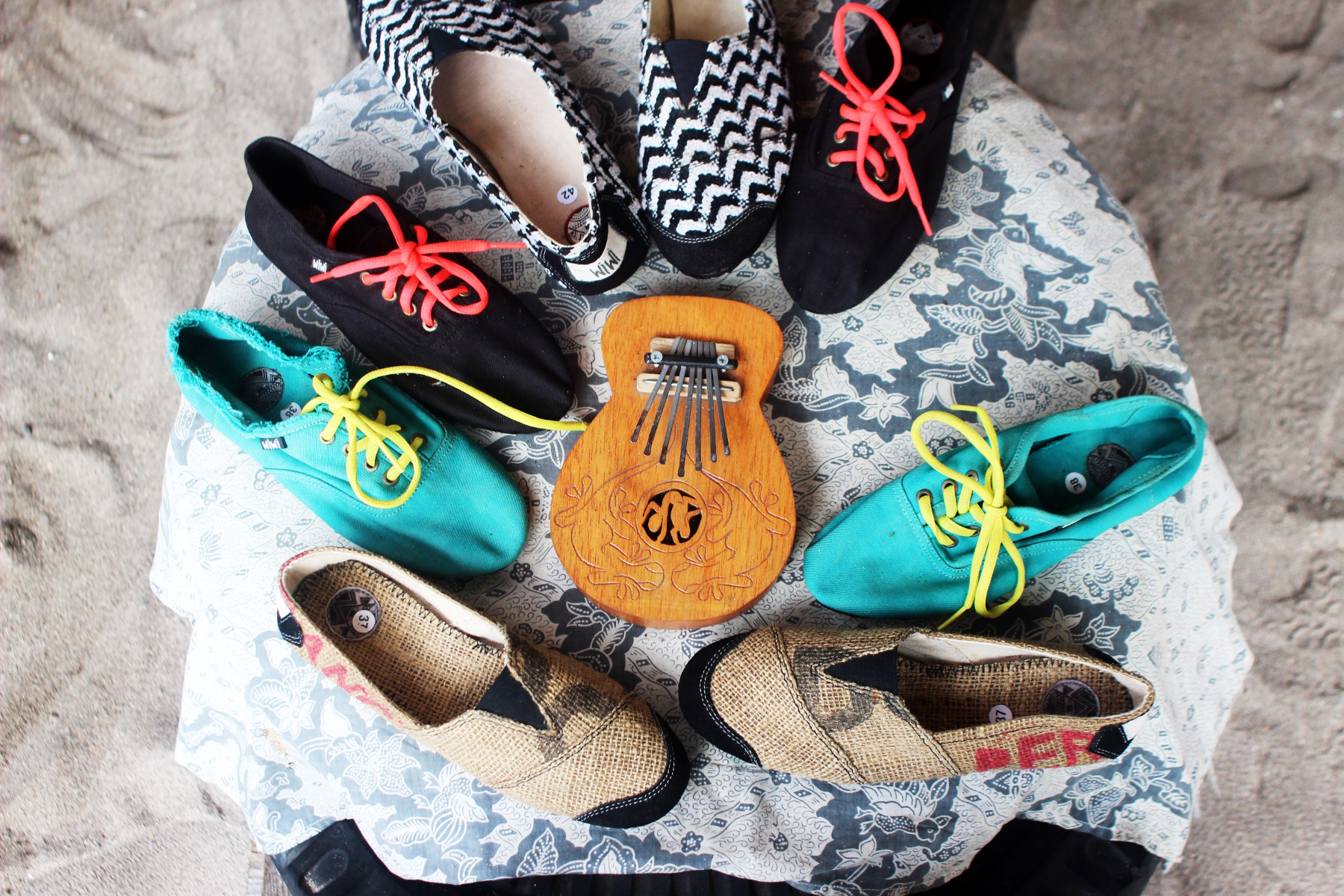 They sell clothes too: shoes and tee-shirts. 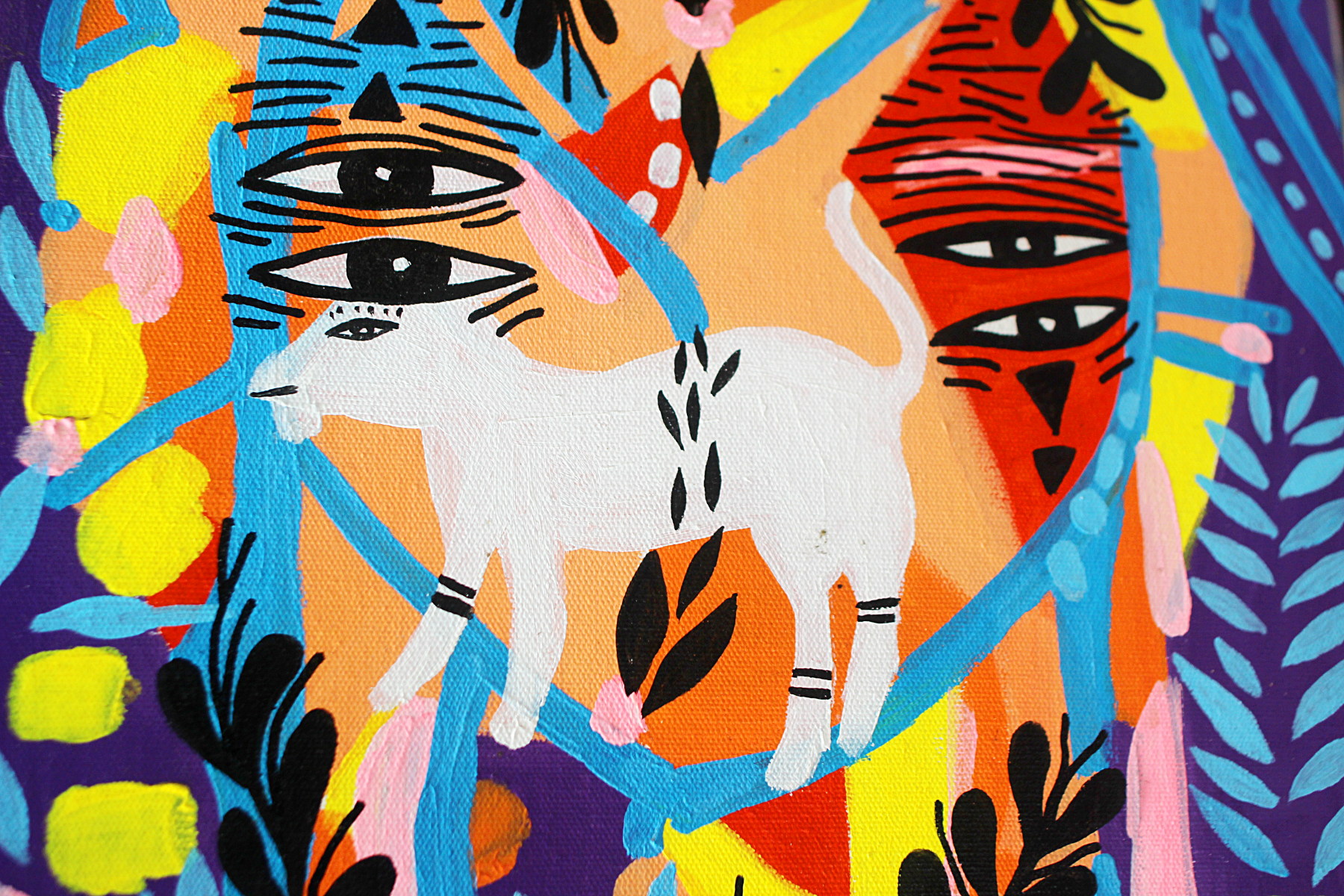 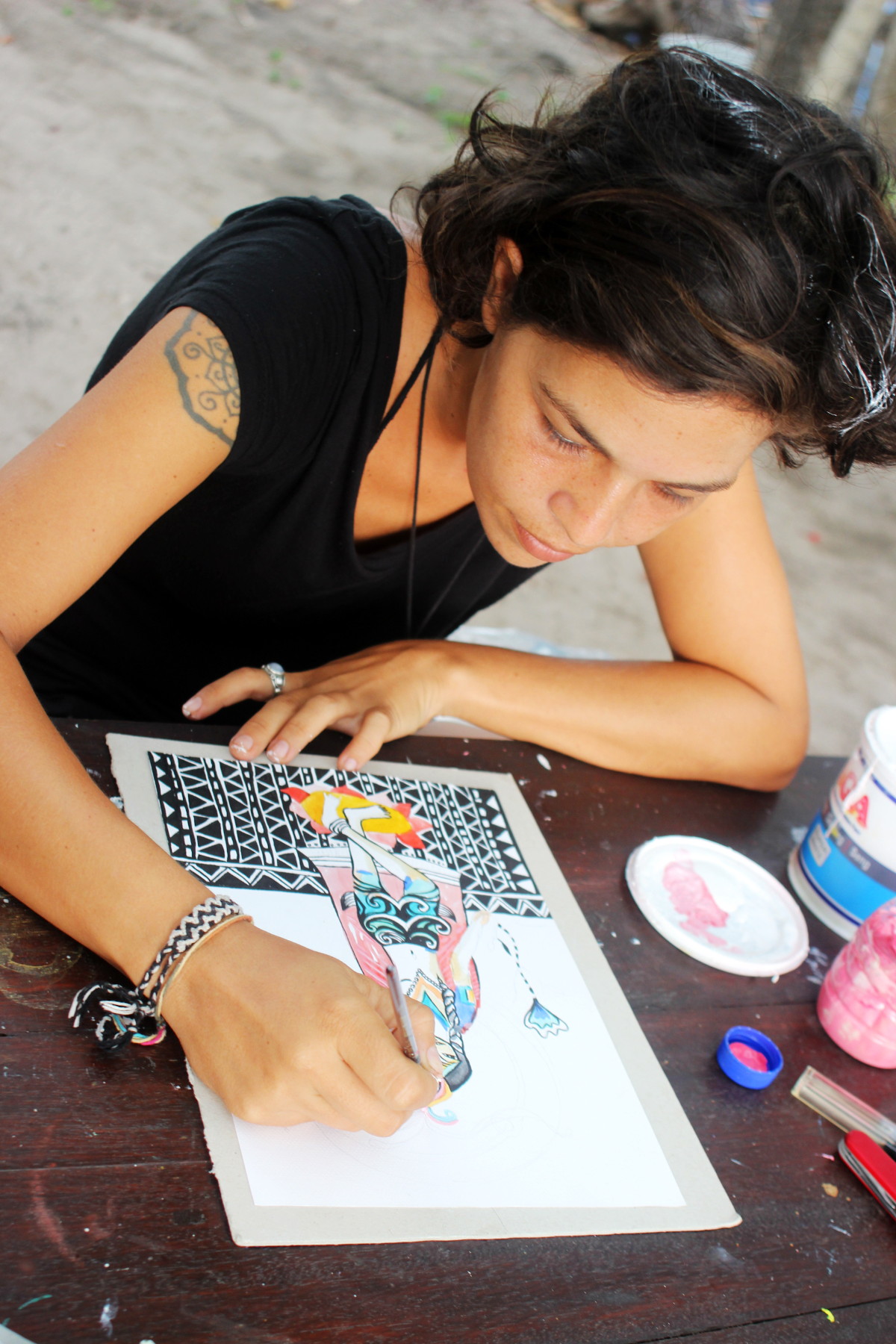 Cleise is drawing something she saw in her dream. 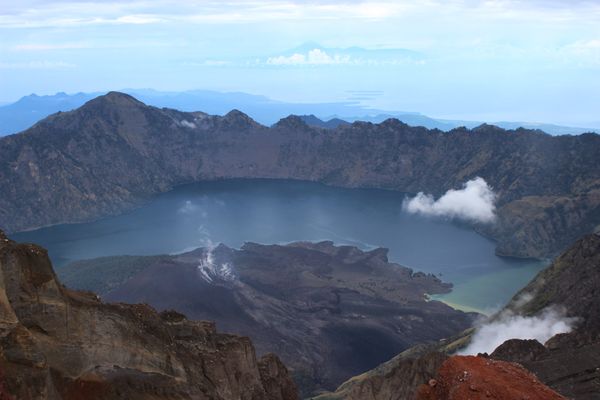 Rinjani is the biggest volcano in Lombok island. Its summit reaches 3726 meters and dominates the crater Segara Anak. It requires two days of walk to make the round-trip from the closest village 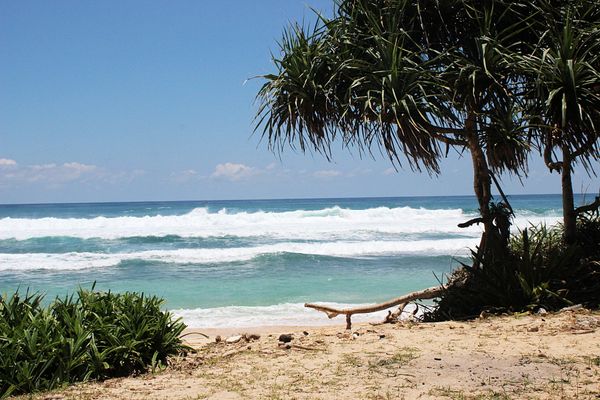 Kuta is a big urban area close to the sea. Nearby stands two other well known cities: Seminyak (the chic equivalent of Kuta) and Denpasar the main city of Bali. When you arrive

Addicted to Internet
—
Gili Islands, The Place to Chill
Share this